The K’Nough are one of the few non-humans in this novel.  I figured I would also touch on them because they live in the universe as well.  If you’ve read the Prologue, you would recognize that they are,… well, let’s see what it says about them:

As time progressed, other, more helpless civilizations joined, pooling their resources in order to defend themselves against the onslaught of the many powerful races in existence. Races such as the K’Nough; a furry, arachnid-like race who had many times before attacked these worlds, including Earth colonies.

In this novel, the menace of the K’Nough is central to the short story at the beginning of the book, showing the caution this captain warrants for their threat.

However, even I could tell that I don’t think the threat was as serious to him as maybe it should be.  I wondered about that for a while, till I thought about another example:

In the course of investigating weather, I rediscovered a recent hurricane.  One that was so unusual, I didn’t even know it was possible.

The event was a hurricane off the western coast of Ireland.  Hurricane Ophelia (known there as Storm Ophelia, as an extratropical – I’m in the United States) made landfall in October 2017. While only 3 deaths were attributed to the storm, it likely wasn’t an unknown possibility for such a storm to make its way there, even with this intensity. 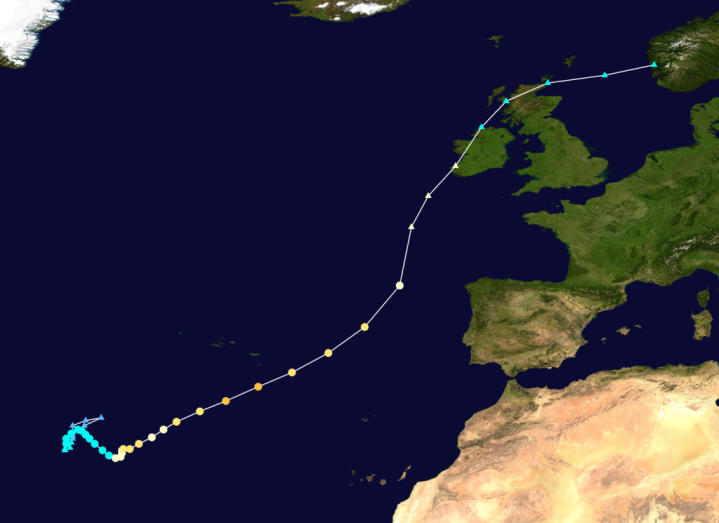 What made it hard to believe (for me) was the track of the storm. Typically a storm emerging from the west coast of Africa makes its way to the United States and/or the Carribean.  Possibly more to the south or to the north, but typically going west.

This storm not only went east but went almost straight for Ireland, the UK, and Norway.  All of which are are typically in waters too cool for such an intense storm (it did fizzle out past Ireland, but still).

This storm though was unusual because it was the easternmost Atlantic hurricane on record.  I’m sure some storms were terrible, and Wiki made note that there was a similar storm 50 years earlier, so it was still possible, even if it was not every year. But it was dangerous if you didn’t reasonably prepare, or receive warning that it was coming.

This is the sort of threat the K’Nough pose initially in the book.  In that short story, the K’Nough were not actively fighting the parties involved; there was no ‘war.’ But, the quote makes mention of ‘colonies of Earth’ being invaded by the K’Nough. It points to the threat being there.

The nature of the conflicts, and likely the nature of K’Nough movements may also dictate his responses. Consider this passage:

He looked back at his tactical officer, Lt. Susan Anderson, who looked intently at her console. He wrinkled his brow. “Problem, Sue?”

She shook her head. “I don’t think so …” she said, her voice trailing off.

Kershaw stood again to walk around to her position. She looked up, briefly intimidated by his sudden presence. “It’s probably nothing,” Sue stated and then pointed at the center screen on her console.

Kershaw looked down, noting the triangular blob at the top of the screen. He looked at Sue. “Sensor anomaly?” he inquired.

Sue shook her head. “I don’t think so. There’s something out there moving, but I’m not sure exactly what.” She pressed a few nearby buttons, creating a small yellow point below the blob. “Here’s where we are in relation to it.” She looked up at the main forward view screen. “It should be in visual range now,” she noted, pointing up at the screen.

Kershaw looked up, fixating on a dark mass, darker still against the blackness of space itself. The nearby stars reflected clearly off its smooth surface. “Magnify the image by a factor of ten.” Kershaw moved closer. “What is that?”

In the earlier passage, The captain is aware of his location, of the threat the K’Nough pose, and given his experience, the nature of their Melee.  Yet he is unaware of what this is.  It would seem this ‘threat’ has changed its approach and thus catching our captain off guard.

But, it could also be something more basic: complacency.  It is not clear how long ago the K’Nough threatened anyone.  Even in this passage, Richard shows it has been centuries since they last dealt with them:

Tess shakes her head. “Well, we’ve got a better fleet then they do, don’t we? We can defeat them, can’t we?”

“Tess, we have not been to war with the K’Nough for four hundred years. I … we cannot know what kind of enemy they are.”

However, the threat seems prescient, given what happened in their previous engagement:

Richard groans. “When they took the perimeter worlds, they exterminated everything on them… 232 million killed, seventeen systems and ninety-six worlds claimed.”

The K’Nough then are indeed a threat.  They simply do not threaten often, or so it would seem. For Richard and his people, it motivates their efforts to bolster their fleet (we’ll touch on that in a later blog), and the need for other things, like their gate system. We will revisit why the K’Nough attacked, but next week, we’ll touch a little on the K’Nough themselves, and their link to Richard’s people.

(5/22/2018 Note:  I want to apologize for the recent delays getting my blog out.  Technology has failed me, and at present, my main computer is undergoing what amounts to open heart surgery, and as such, causing delays since I am editing and publishing from another (one without a lot of the same sources and information compiled on the main computer). I’m fortunate to have a 2nd computer to use. Otherwise, there wouldn’t be a blog period. Thanks for your support, and hopefully things will normalize soon.)

Thanks again for reading!  Please like and share! You can follow on Facebook, Tumblr, and read excerpts from The Silent Invader @RB_Thurman (and follow!), in addition to the chapters I add here. If you prefer, you can also read my posts on Goodreads (I do a few book giveaways there, so you may want to check it out for that).  Your comments are welcome below.  Also, sign up now to receive notifications for when the next blog arrives.